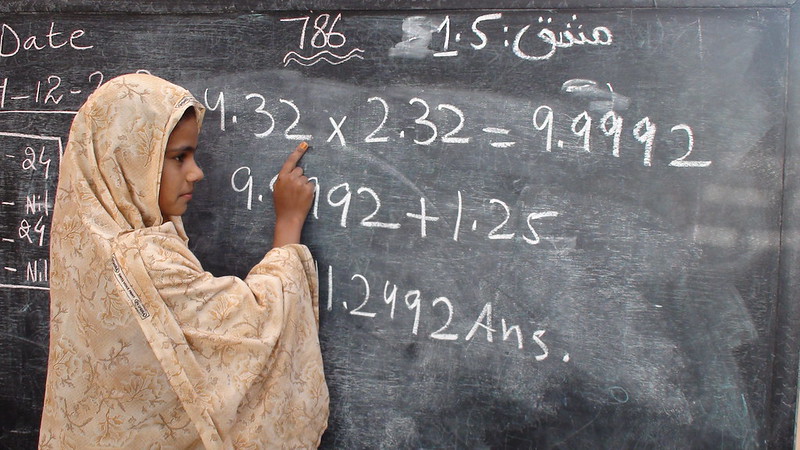 According to the United Nations, school closures resulting from the pandemic have affected 1.6 billion learners across more than 190 countries. It is estimated that some 23.8 million more children would drop out of school and an additional 5.6 million child marriages can be expected because of the coronavirus pandemic. Education Cannot Wait has appealed for more funding to provide an education for 30 million refugees, 40 million displaced children, and 75 million children in conflict zones – of whom 39 million are girls. Credit: Zofeen Ebrahim/IPS

BONN, Germany/UNITED NATIONS, Sep 18 2020 (IPS) – Aryan is a 15-year-old girl from Afghanistan who lives with her family in a shelter in an undisclosed country in Europe. She doesn’t go to school. But she is hugely creative. And it shows in how she occupies her time during the day — writing poetry and making bracelets and earrings that she hopes to sell online one day.

Her mom is creative too. Though her creativity stems more from necessity and a need to care for her family. At the height of the COVID-19 lockdowns when Aryan’s mother couldn’t find a supply of protective masks for her family to wear, she made them out of socks.

Aryan likens the COVID-19 lockdowns to a war, one without the dropping of bombs.

But she says life is more difficult for those without a place to live, with no home and no shelter.

She thinks specifically of what is happening on the border of Greece and Turkey. In the refugee camps, particularly Moria, which is located on the Greek island of Lesbos.

“How crowded and cold it is there, how can people be so blind to forget the children, how their toys can become infected from dirty water and from garbage all around,” she says.

Not just a health crisis but an education crisis also

Aryan is sadly just one of the world’s 40 million displaced children. Her story is just a chapter of the larger story faced not only by refugee children but also the 75 million children living in conflict zones. Children whose lives have become more complicated by the COVID-19 pandemic. According to the United Nations, school closures resulting from the pandemic have affected 1.6 billion learners across more than 190 countries.

“We are facing an economic and a health crisis, which has now become an education crisis. And the people who are hardest hit are the 30 million refugees, the 40 million displaced children, the 75 million children in conflict zones. And we know from the reports that we’ve just heard … despite all our efforts the situation is just getting worse and not better and we have to do more,” former Prime Minister of the United Kingdom Gordon Brown said yesterday Sept. 17.

Brown was speaking at a webinar on the sidelines of the 75th Session of the U.N. General Assembly hosted by Education Cannot Wait (ECW) — a multilateral global fund for education in emergencies and protracted crises — titled “The Future of Education is Here for Those Left Furthest Behind”. He was joined by education advocates, leaders and politicians, as well as teachers from around the world.

Seeing young children from Moira, forcibly on the move, must be catalyst for supporting their education

Brown, chair of the ECW high-level steering group and also the U.N. special envoy for global education, brought attention to the current situation in Moria, which was devastated on Sept. 8 by a fire.

According to Human Rights Watch, the destruction in the largest refugee camp in Europe left some 13,000 refugees and asylum seekers without shelter and services.

Greek authorities have been attempting to move people to a new camp, while Germany has offered to give shelter to some of the refugees and asylum seekers.

But Brown had raised the tragic situation of the camp two years ago.

“I highlighted the tragic situation of three young teenagers who couldn’t get [an] education or any resources at the Moria camp in Greece. Young people who were driven to try suicide themselves. Losing hope, desolate, they tried to take their own lives. And I appealed for more funds to help the refugees there and in the other camps nearby,” he recalled.

“A few weeks ago, when I was trying with others to get money into this camp for help with education, we had one of the worst fires we have seen. Today we are seeing hundreds of people moving from that area into other camps in the area but worried about their future,” Brown said.

He said that if there was anything to persuade people to do more and commit to the education of children in conflict it was seeing young children from Moira, forcibly on the move “having to find a new camp for themselves but still in need of the education and the help and the support that we haven’t been able to give so far,” Brown said, emphasising that this was the mission and task at ECW and to ensure that millions of people and displaced refugees have a better future.

Brown said that its inception a few years ago, ECW has created several million places for young people to receive an education when they are either displaced or in refugee situations. He also stressed that ECW has been the catalyst for other organisations to come together and do more.

Working with 75 partner organisations globally, ECW has so far provided $662.3 million for supporting education in emergencies.

In August, ECW launched its 2019 annual results report tiled Stronger Together in Crisis, showing that in 2019 alone the fund provided education to 2.6 million vulnerable children, raising $252.8 million from private and public donors. In total, since its inspection ECW has raised $600 million.

Thursday’s event, which hosted a new donation feature in partnership with Zoom and online fundraising platform Pledgeling, raised an additional $23.6 million to support vulnerable children and youth, particularly those affected by conflict, forced displacement and protected crises. The aid will focus on the most marginalised, including girls, refugees and children with disabilities, ECW said in a statement. Within the first few minutes of the meeting 4 donors had already pledged over $12,000.

But Brown pointed out that ECW will require $300 million in the coming year to provide the service needed for children.

ECW director, Yasmine Sherif, said despite the gains made over the years, “education is still not here for a large part of children and youth affected by conflict and crisis and forced displacement”.

She said ECW wanted to make education a reality for all the 75 million children in conflict zones, more than half of whom — some 39 million — are girls.

She also pointed out that the type of education delivered was also very important “to make sure that we deliver quality education, an education that is relevant”.

She explained that it was important that the curriculum thought what was relevant and important to learn in the 21st century but also addressed the specific needs of children or young people who had grown up in a country of violence or had been uprooted from their homes and forced to flee.

“There needs to be a holistic approach and to look at all the needs and the potential that they have because of what they have gone through,” Sherif said.

A staunch supporter of ECW, and U.K. Minister for Overseas Territories and Sustainable Development at the Foreign, Commonwealth & Development Office, Baroness Liz Sugg said that while there was already a global crisis before the pandemic, the stakes are “far, far higher” now.

“Where conflicts rage, access education is not just crucial for the future of each individual child but for the reintegration, for economic development, and for building that sustainable peace we really want to see,” Sugg, who is also the U.K. Special Envoy for Girls’ Education, said.

She added that just because every country is facing economic instability at the moment, is not an excuse for inaction on education.

16-year-old Catherine from South Sudan said that the most difficult part of the COVID-19 pandemic was not being able to attend school. “Before, I was out of school for one and a half years because I am an orphan,” she explained.

Catherine’s concerns about being able to attend school again are valid. According to a recent U.N. policy brief on the impact of COVID-19 on education, countries with low human development are facing the brunt of school lockdowns, with more than 85 percent of their students effectively out of school by the second quarter of 2020. It was also estimated that some 23.8 million more children would drop out of school and an additional 5.6 million child marriages can be expected because of the coronavirus pandemic. Women and girls will ultimately bear the brunt of the worst impacts of the pandemic.

Ministers from Burkina Faso, Somalia and Ethiopia also highlighted the plight of many of their refugee children.

Abdullahi Godah Barre, Minister of Education and Higher Education in Somalia, said 68 percent of the country’s children were out of school.

Ethiopia’s Minister of Education Dr. Eng. Getahun Mekuriya discussed how, with one of the largest refugee populations in Africa, the country is addressing the current crisis. In the refugee camps, Mekuriya said, there is heightened food insecurity, inability to pay rent, among other issues — further exacerbated by the pandemic, which in turn has grave effects on education.

The Ethiopian government has created a distant learning plan which is helping children to learn through television, radio and other digital platforms.

“An estimated 5.1 million primary and secondary school children received this service,” Mekuriya said, adding that technology access and connectivity still remains a challenge for many in the community.

Henrietta Fore, Executive Director of the U.N. Children’s Fund, which hosts the ECW secretariat, called for a reimagining education — “of changing our way of thinking, of rewriting our story”.

“We really have to refresh our thinking about what education can be,” she said.

She shared her recommendations on what the steps forward ought to focus on:

Despite the concerns and the high number of students the crisis is affecting, leaders were hopeful. Dag-Inge Ulstein, Norway’s Minister for International Development, said there is light ahead on the road.

“The story about how humanity handled COVID-19 is being written now, and education will have a central place in the conclusion,” he said. “Let it not become the story of a lost generation, nor of a community that abandoned its promise to leave no one behind when push came to shove.”

Brown echoed these sentiments. “I know that everybody will share the same aim, let us build a better future for this generation of young people. Let them have the education they need. They are more talented and with more potential than the underfunded education systems we’re providing them with at the moment. Let’s make sure that we can see the talent of a new generation realised and fulfilled,” Brown said.

But until then, life for Aryan remains a nomadic one.

Today, Aryan is sitting outside the shelter her family have been staying at. Her backpack full with her belongings.

She has found out that the family have to move. “This is how the situation of most refugees are running like this. Having their backpack, their suitcase, moving around, from place to another place,” she says in a video she has made for GlobalGirl Media — a digital journalism training and platform dedicated to providing content by, for and about girls and young women, globally.