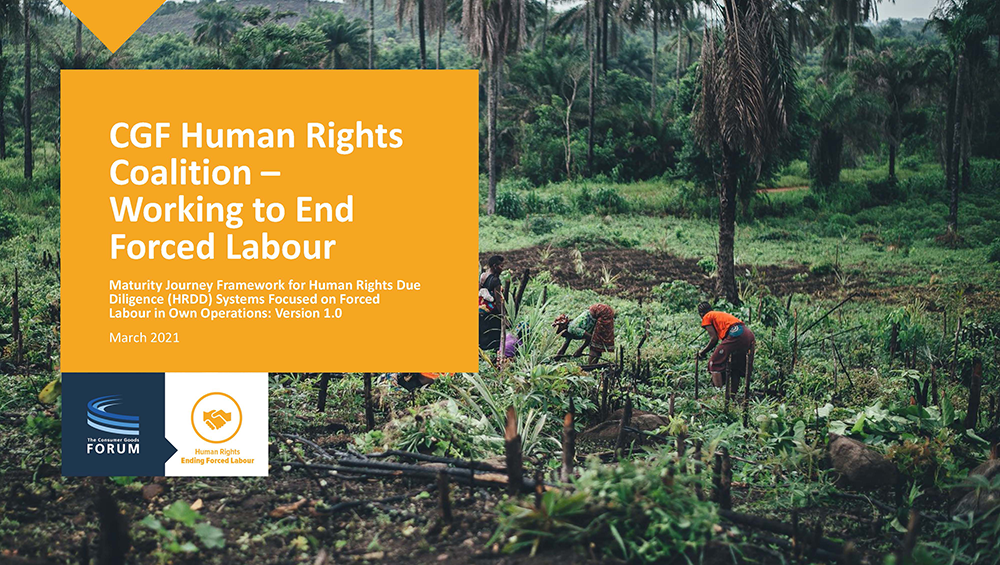 PARIS, 16 March 2021 – With a mission to help eradicate forced labour from consumer goods supply chains globally, The Consumer Goods Forum’s (CGF) Human Rights Coalition – Working to End Forced Labour (HRC) has today published its Forced Labour-focused Human Rights Due Diligence in Own Operations Maturity Journey Framework, the first strategic document from the HRC laying out the aligned actions members will take in their ongoing efforts to fight forced labour. The Framework maps out how the 22 companies of the HRC – all CGF members – will implement and improve human rights due diligence (HRDD) systems in their own operations to root out and remedy actual and potential risks for forced labour.

Launched on Human Rights Day in December 2020, the CEO-led HRC was founded to accelerate and align CGF members’ actions to eradicate forced labour after five progressive years of CGF efforts on the issue. The HRC selected HRDD systems as a strategic focus of its work, committing in its Charter for members to deploy HRDD systems in their own operations with the aim of reaching 100 percent coverage by 2025, because of the valuable role these systems play in closing the data gap around the true scale of forced labour risks.  HRDD systems consist of the processes that aid businesses become aware of actual and potential human rights impacts associated with their operations, enabling them to prioritise and manage the areas of greatest risk and leverage. Doing so will allow them to have more visibility of and work on the interconnected human rights issues and risks, particularly those that relate to forced labour.

The HRC developed its HRDD Maturity Journey Framework through extensive knowledge-sharing from members and consultation with stakeholders across civil society, international organisations, and governments. The Framework is also founded on ensuring the CGF’s Priority Industry Principles are respected and implemented. These Principles, launched in 2016 and aligned with several international frameworks including the UN Guiding Principles on Business and Human Rights and International Labour Organization (ILO) Forced Labour Indicators, identify the three most problematic, yet often common, employment practices which can lead to cases of forced labour. They are:

The launch of the Framework is also a critical step in the development of the Coalition’s Palm Oil Roadmap, which outlines how Coalition members will work with select palm oil suppliers to implement HRDD systems and address forced labour risks specific to the sector. This Roadmap will be launched later this year.

Paul Lalli, Global VP, Human Rights, The Coca-Cola Company, and HRC Co-chair, said, “As the new co-chair of the HRC, I have been greatly impressed by the passion and motivation of the Coalition members to develop this framework and move forwards on their commitment to implement HRDD systems in their own operations by 2025. By laying out three different maturity levels in the implementation of this Framework, the Coalition has set its sights on driving continuous improvement and achieving results without compromising respect for human rights or the CGF’s Priority Industry Principles.”

Veronika Pountcheva, Global Director of Corporate Responsibility and Senior Vice President, METRO AG, and HRC Co-chair, said, “The publication of this Framework is a significant milestone for our Coalition. I’m proud that after many years of working with CGF members on the issue of forced labour, we have developed this comprehensive and well-aligned approach on HRDD. This six-step framework lays out how we can all concretely implement and continue to improve mechanisms that help us address human rights risks, and by taking a common approach, we ensure all of us will do so in an effective manner. It’s a game-changer that I am confident will have a great impact on the social sustainability of our own operations.”

Didier Bergeret, Director, Sustainability, The Consumer Goods Forum, said, “The fact that Coalition members have committed to driving out forced labour risks in their own operations is a major victory for transparency and accountability efforts in the fight against forced labour. More of both are needed across the board in order to effectively identify and address the systemic drivers of the forced labour challenge. I congratulate the Coalition members on this critical effort.”

About the Human Rights Coalition – Working to End Forced Labour

The CGF Human Rights Coalition – Working to End Forced Labour (HRC) is a CEO-led Coalition of Action from The Consumer Goods Forum. As an initiative of 22 of the world’s largest consumer goods companies, the HRC is committed to helping achieve fair and decent working conditions worldwide by eradicating forced labour from its supply chains. The work of the HRC continues the CGF’s long history of engagement on the issue of forced labour within consumer goods supply chains by building on the CGF’s Social Resolution on Forced Labour, the first of its kind in the industry; its Priority Industry Principles, and ongoing relationships with key stakeholders in the industry. For more information about the HRC, visit www.tcgfsocial.com.

About The Consumer Goods Forum

The Consumer Goods Forum (“CGF”) is a global, parity-based industry network that is driven by its members to encourage the global adoption of practices and standards that serves the consumer goods industry worldwide. It brings together the CEOs and senior management of some 400 retailers, manufacturers, service providers, and other stakeholders across 70 countries, and it reflects the diversity of the industry in geography, size, product category and format. Its member companies have combined sales of EUR 3.5 trillion and directly employ nearly 10 million people, with a further 90 million related jobs estimated along the value chain. It is governed by its Board of Directors, which comprises more than 58 manufacturer and retailer CEOs. For more information, please visit: www.theconsumergoodsforum.com.